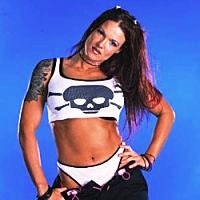 Lita was, and remains, the coolest WWE Diva of all time. With baggy pants, visible thong, fiery red hair, and an arm sleeved with ink, Lita became the alternative Diva; the one who stood out most from the crowd.

Often times, Lita would find herself involved in the action as the eccentric Diva could perform moves many of the male talent could not execute. Lita made fans cheer and cry and shiver with excitement. The all-around Diva who refused to stand on the sidelines and watch. When the game was being played, Lita was taking the field as well with a fearless attitude.

Eventually, Lita turned heel as a real life love affair would play out on WWE programming. This change of character provided a fresh outlook on Lita as the “cool chick” turned “bad girl” was now loathed by the very same fans who once popped from their seats. The heel turn – while forced by circumstance – would make Lita the most provocative Diva on the roster.

In this piece we will get to know Lita – whose real name is Amy Dumas – a little better as we take a look at the life and career of the former four-time WWE Women’s Champion.

Everybody can see in plain sight the tattooed arm of Lita and it has helped define her as a WWE Diva. Lita loves her ink and displays it with pride. However, not all tattoos are visibly to the public.

Lita has the word “PUNK” tattooed on the inside of her lip, a process that surely included much pain but that’s Lita: the punk-rock wrestling girl who learned to endure pain thanks to her chosen profession.